It’s the last TMI Tuesday for the month of August. Did you know August was originally named Sextilis (‘sixth’). In 8 B.C. Sextilis was renamed August in honor of Roman Emperor Augustus. BTW…August or Sextilis was the sixth month of the year in the ancient Roman 10-month calendar. 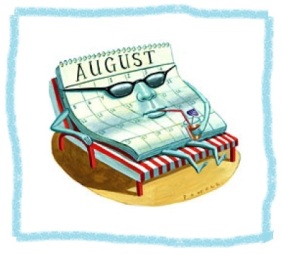 Now for more about August:
1. In the Philippines today is National Heroes Day. Who is your hero? (You can name up to 3). Why?
The only person who I could call my hero right now is Master. He has helped me find the most important things in life and is busy assisting me in getting myself into a position so we can live together. Right now I don’t need anything extra.
2. August is Romance Awareness Month. What have you done to enhance romance in your life? Or what have you become aware of or discovered with regards to romance?
After our holiday to Sicily we realised we needed to get our M/s and kinky selves back on track. The holiday was wonderful, but very busy. Added to that we are in the process of getting my house ready to sell and his for me to be able to live with him in. We spend some of our time reconnecting each week and that helps the romantic side of our life too.
3. In the month of August there is National Raspberry Creme Day, National Ice Cream Sandwich Day, and National Chocolate Chip Cookie Day. Which day are you most likely to celebrate and how would you celebrate?
I really eat very few puddings / sweets / ice creams right now since I am trying to lose weight. But if pushed I would go for the Raspberry cream.
4. August 13 was International Left-hander’s Day. Who out there is a lefty? Anyone ambidextrous?
I am left handed but have learned to be ambidextrous since to be honest the world is made for right handed people. I think that our use of the internet, keyboards, mice and smart phones have helped. The best way to tell though is how people use their cutlery.
5. In the U.K. today is a late summer Bank Holiday. What are you doing (or did you do) with your “free” time?
Yep it was a bank holiday weekend. We went to see Allegro which is being shown here for the first time, found an Italian market over the road for some lunch. We ate wonderful tapas and we spent time trying to fix up my garden ready for my house sale later this month. Painting a fence is completed more easily if you are ambidextrous!
Bonus: Post a pic from your mobile phone that was taken in this month of August. Explain the photo…or not?
My favourite photo from August was this one, taken in France at the beginning of the month.

This site uses Akismet to reduce spam. Learn how your comment data is processed.

Search the Archives by Date

Not the holiday we expected